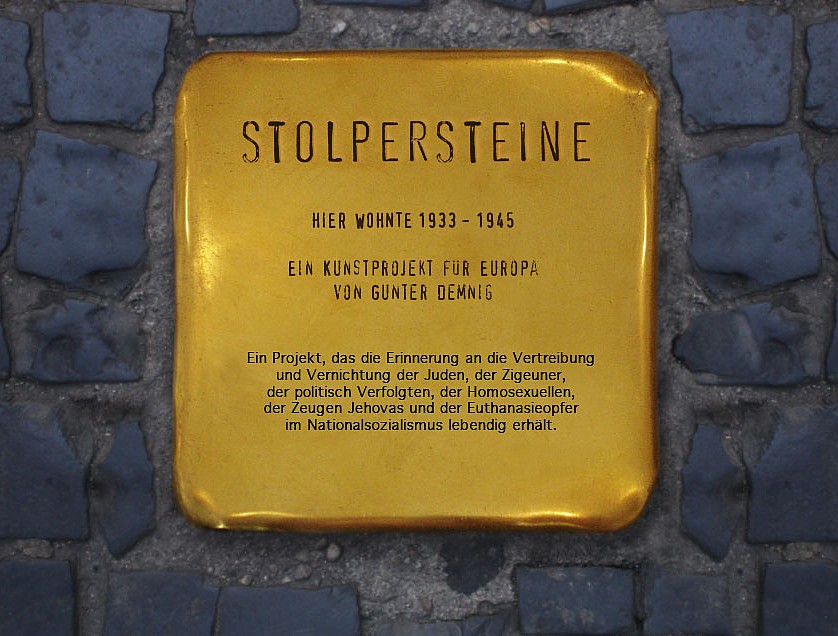 A man under enormous pressure: Conceptual artist Gunter Demnig has set off an avalanche with his project Stolpersteine – or Stumbling Stones – which no single person can manage alone, yet he wants to carry the whole burden by himself. Demnig’s mission: To give the nameless victims of the Nazis back their identity. His Stumbling Stones are small brass-capped cobblestones embedded in the pavement outside the Nazi victim’s last known home. Engraved on each are the words “HERE LIVED”, followed by a name, the date of the deportation and the place the victim was murdered. By now Demnig has laid 6,000 of them in more than 120 places. Month after month, more of them are embedded in Germany and throughout Europe.
Yet as his project gains more and more widespread success, the demand for more StumblingStones becomes ever greater. Already today 4,000 private donators and voluntary helpers in Germany and across Europe are waiting impatiently for their Stumbling Stones. The film will recount the story of an obsessed artist who insists on fashioning every single stone with his own hands. Yet at the same time the pressure keeps growing to satisfy people’s expectations for more than he can produce, forcing a solution upon him. Regarded as the largest decentralised memorial in Europe, not only have the Stumbling Stones mobilised thousands of helpers, they have also set off heated public controversy extending far beyond the artist’s own person.
Stumbling Stones polarise: In cities like Munich, Mainz, Krefeld or Vienna they have been forbidden, while the mayor of Hamburg or Germany’s President Köhler have personally committed themselves to the project. Various regional Jewish communities want to prevent the victims’ names being walked on, while the Central Council of Jews in Germany officially supports the project. Stumbling Stones have been vandalised or ripped out by unknown individuals and openly fought against by neo-Nazis. Stumbling Stones are protected by members of the public and regularly polished by them. At times Stumbling Stones serve to replace gravestones and in other places they have become tourist attractions. The film’s central focus will be on these controversies. While the Stumbling Stones may be the work of a single artist, they could only achieve such an impact thanks to the public’s active participation in the project and their reactions to it.
By revealing the sentiments this project arouses in society, Dörte Franke’s film will also recount aspects of how we deal today with our past, one which we still constantly stumble over – not only in Germany.